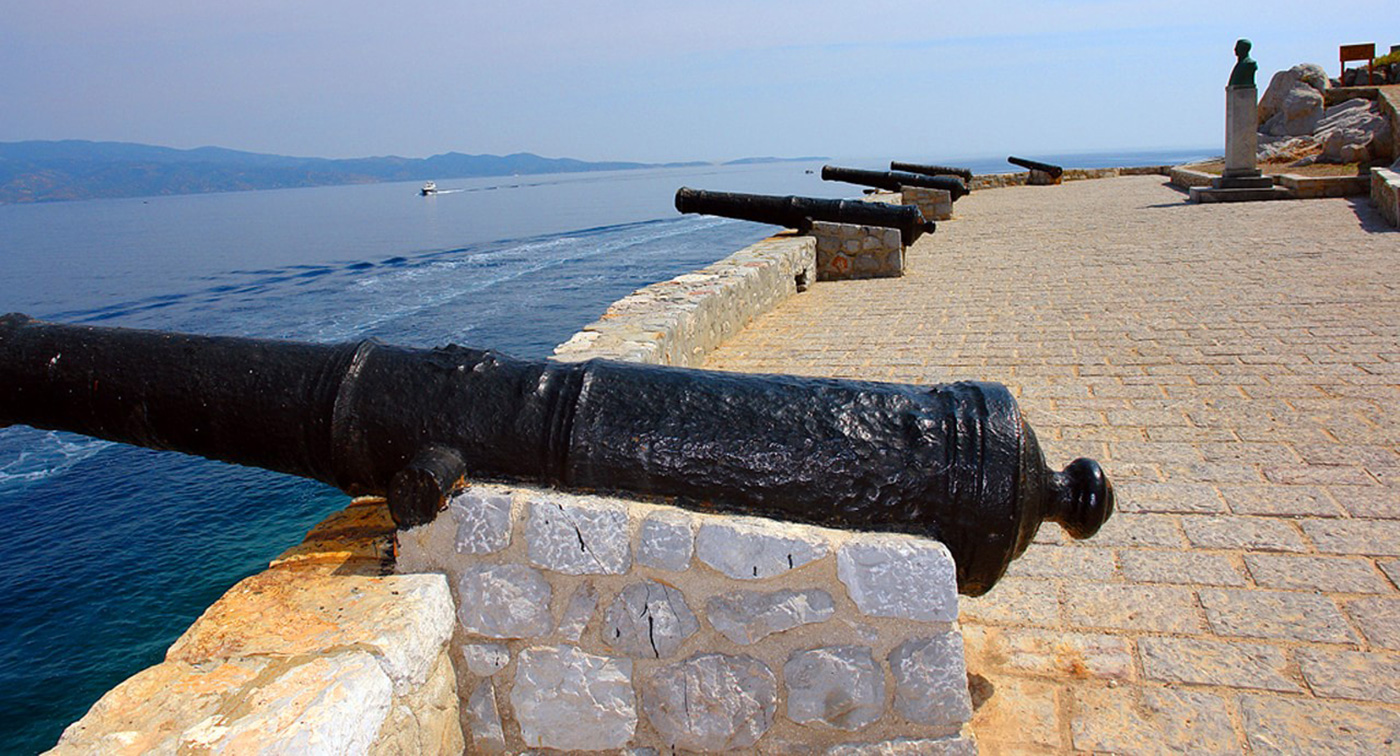 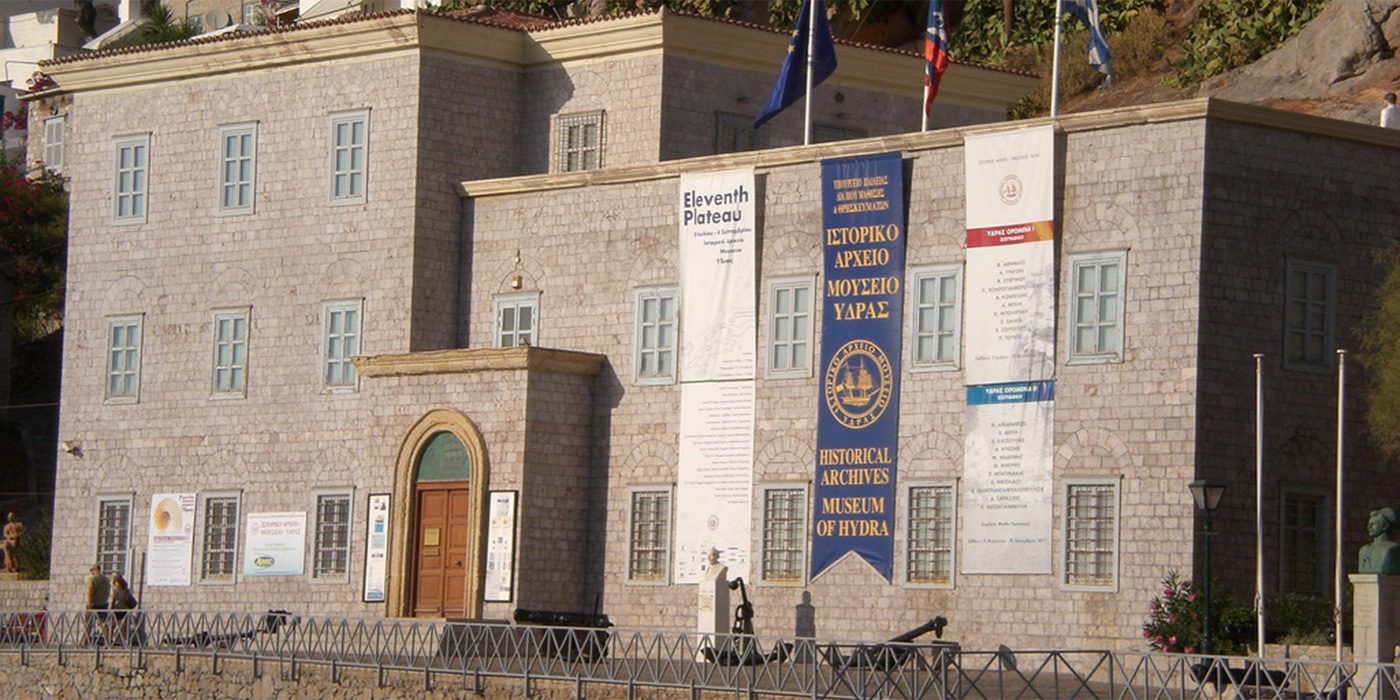 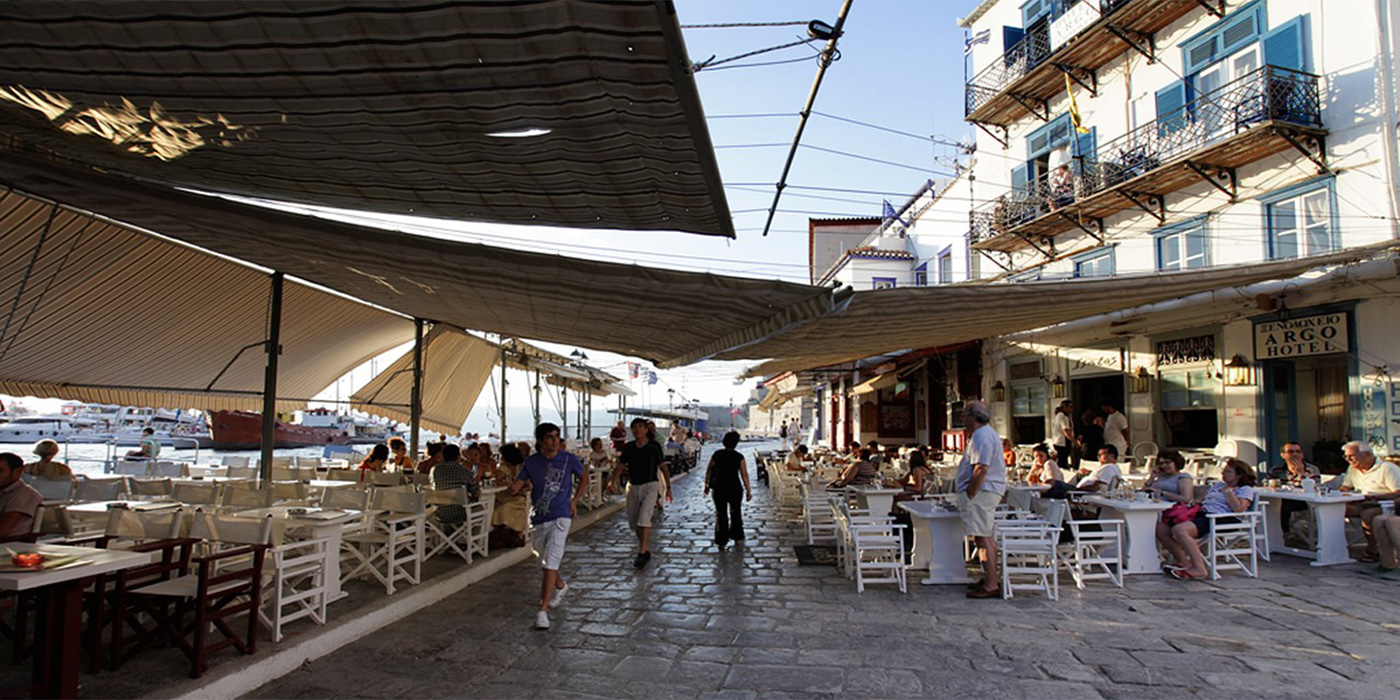 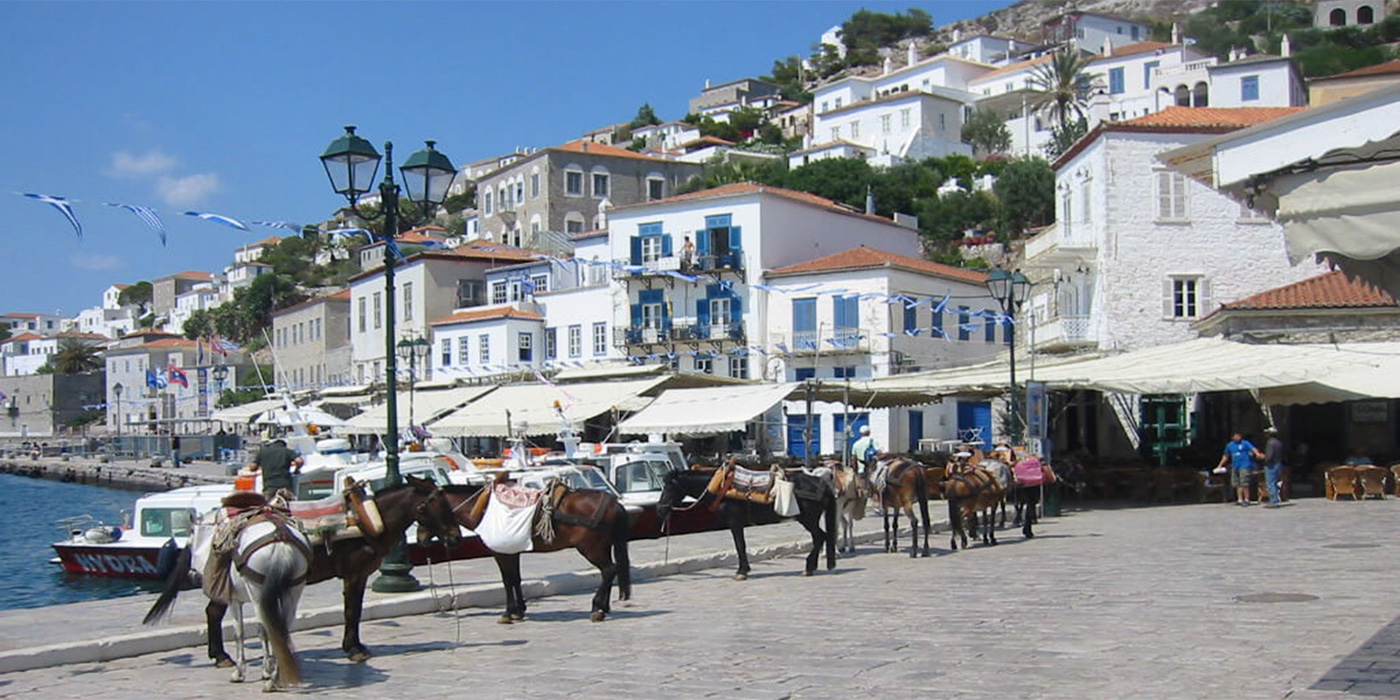 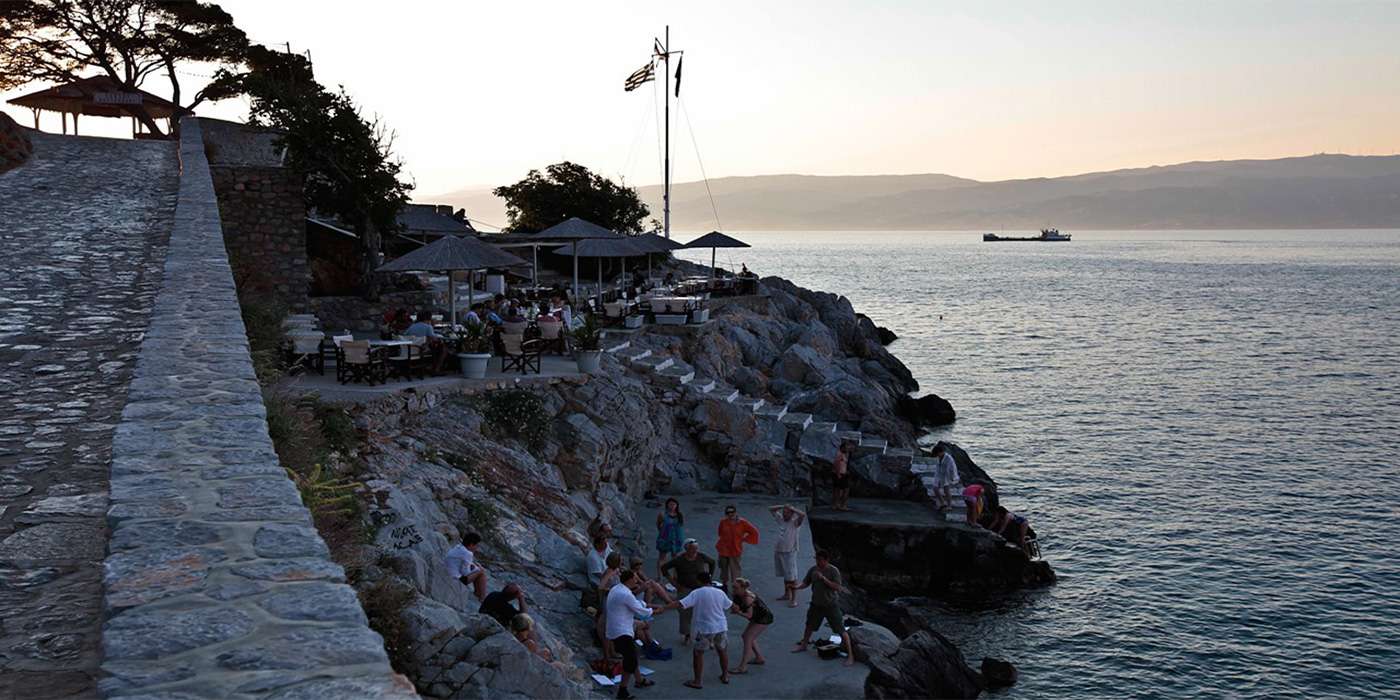 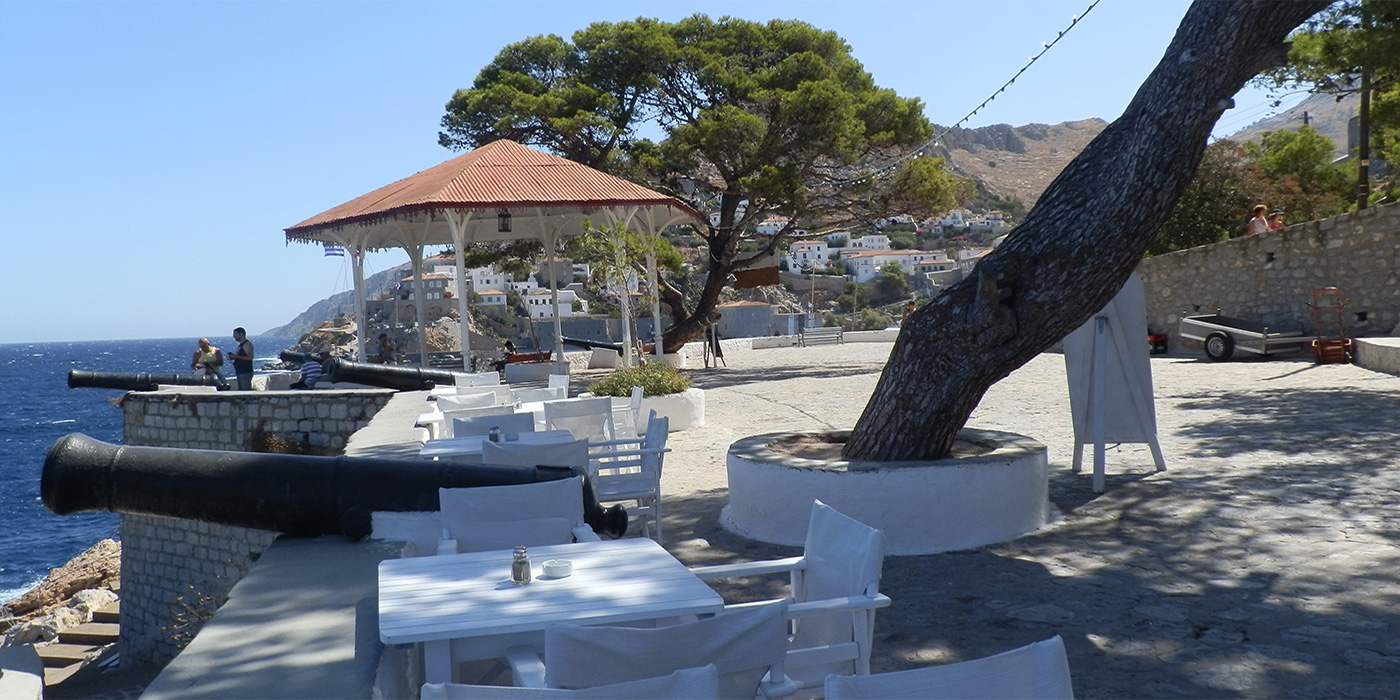 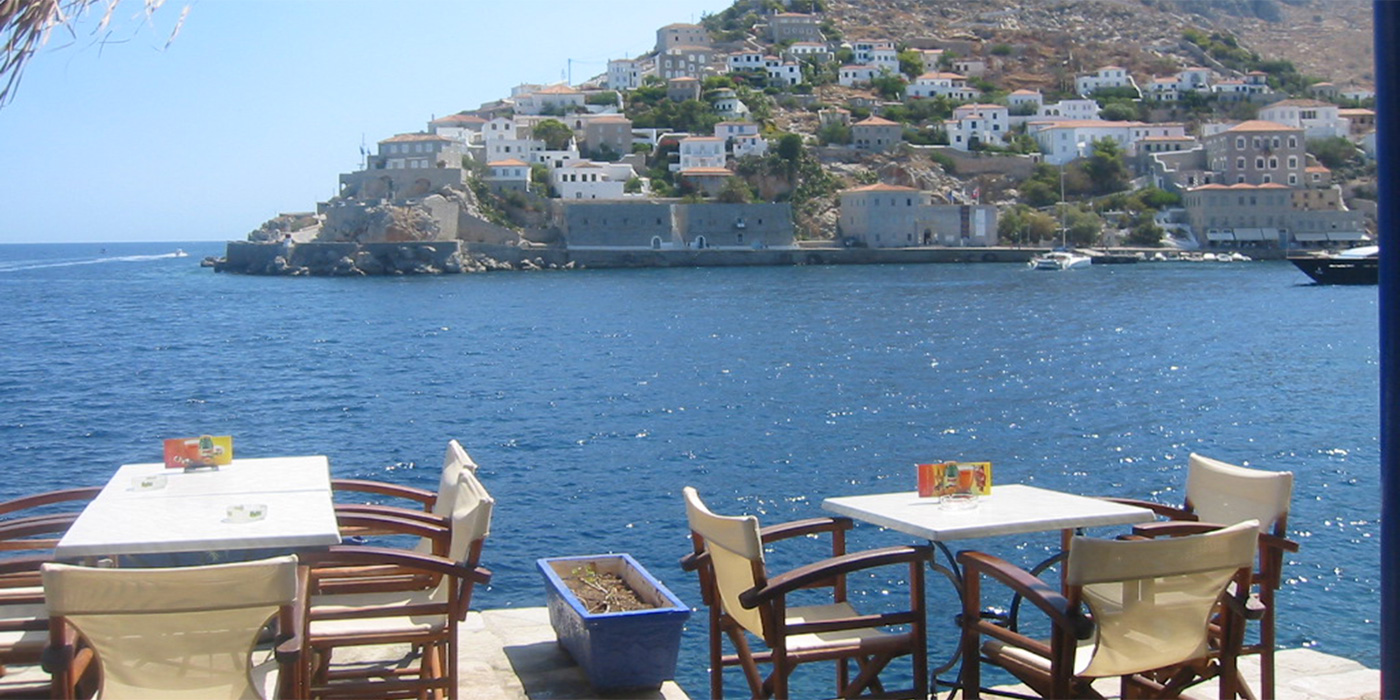 The imposing houses and well-kept mansions, built amphitheatrically beneath the bare cliffs with tourist shops and jewelers, restaurants and cafes, boats, sea taxis and large yachts, compose the port of Hydra and affirm the routine of Hydraians that bears little resemblance to the 21st century.

The coastal road, the Paul Kountouriotis street, extends from the statue of Miaoulis until the location Petalo. The street's paving was completed in 1912 and to this, ends all the paved vertical paths, that start from the top and end up at the sea.

Right and left from the entrance of the port, there are the Parapets with the Canons, which protected the town. On the left side of the harbor, over the left bastion, there is the statue of Admiral Andreas Miaoulis, which was erected in 1993 andits base are buried the bones of Miaoulis, who came to Hydra in 1985.

On the waterfront, under the ramparts, are the rusty old chains that closed the entrance to the harbor. The road which starts near the statue, leads in Mandraki, which was the military port during the Revolution.

West of the statue of A. Miaoulis, at the beginning of the beach of the port, is the Port Authority and the KEP which was being housed in the old stone made gunpowder house and a little beyond the art gallery and concert "Melina Merkouri".

Next to the Port Authority, is the marble building that houses the Historical Archive-Museum of Hydra and following is the home of Tsamadou family, which houses the famous School of Merchant Marine. At the point of the harbor opposite the breakwater, beats the heart of town. Here are banks, public offices, shops, restaurants and cafes.

In the center of the harbor, is located the Cathedral of Hydra, built in 1648 and reconstructed in 1774. A three-aisled basilica with a dome, two marble towers and two silver chandeliers inside. Previously the Cathedral served as a Monastery of the Virgin Mary.

In front of the Monastery there is the Kountourioti Paul's Square with the statue of the Greek politician dominating its center. After the square, at the left, stands the Church of the Visitation with the wooden iconostasis.

Further down a steep path to the left, leads to the Mansion of Tombazis, which today houses the School of Fine Arts. Rightmost of the Monastery of the Assumption begins a narrow, paved and scenic winding road that leads to the old town of Kiafa. The road passes right by the Gyrokomeio and then leads to Kamini.

Soon we meet the Mansion of Kountourioti Lazarus, built in the late 18th century and is now a branch of the National Historical Museum. Continuing to the road, we reache the Periptero, the western bastion of the harbor and one of the most beautiful location of Hydra. Under the Periptero is the rocky coast of Spilia.

Over the cannons, to the left there is a small pine forest with the mansion of George Kountourioti be raised amongst the pine trees and up to the the hills stand in a line the derelict mills.

The road continues, reaches Avlaki, a picturesque district built on the steep slope of the mountain, to reach the picturesque Kaminia. At the groundfloor the Hotel has got cafe-snack bar - restaurant above the sea to enjoy your coffee or breakfast.

At the Hotel there is a bar (self-service) where you can enjoy the coffee of your liking in the living room or in the veranda.

At the Hotel there is a bar (self-service) where you can enjoy the coffee of your liking in the living room or in the veranda.

WE RECOMMEND IN HYDRAActivities to spend your time in Hydra

Naturally, it's worth taking a short walk to the port of Hydra to visit, browse or simply "gaze" at the quaint little shops along the beach.
Visit the Historical Archive-Museum of Hydra, the Ecclesiastical-Byzantine Museum and the historic mansions of the Fighters of the Greek Revolution of 1821, which have also been turned into museums.
Hydra is famous for its diverse natural environment, which is a paradise of the walker and nature lover. There are eleven tracks which you can follow on foot or by donkey.
Following the route of these paths amongst wild flowers, you can visit the old monasteries where, in addition to the architecture, you can admire the unique artifacts and exhibits.
Get informed about different exhibitions and concerts amongst other events in Hydra island, during the summer months.
The Hydra Diving Center is a must for anyone to experience the rich and colorful images of the beautiful underwater world around the island, a unique, unforgettable diving experience.